Poker In Our Language: Idioms and Vernacular

From time to time, you might hear a phrase that reminds you of poker. A TV show character announces she’s calling another character’s bluff. Someone tells you that you can achieve an unlikely outcome if you “play your cards right.” Or that you just have to “play the hand you’re dealt.” It turns out that the English language is riddled with references to poker. Here’s a list of poker colloquialisms that live in our speech.

You can bet your bottom dollar! – You can be sure about that!

A reference to a stack of chips (representing dollars.) To bet the bottom chip indicates that you’re so confident in something that you’d risk the last chip in your stack on it.

When the chips are down… – The critical moment.

Once the chips are “down” (as in once you’ve released them from your hand into the pot) then all that’s left is to watch the decisive reveal of cards to see who wins.

I’ve got it down pat! – I have this perfected!

This refers to draw poker games such as Badugi, 2-7 triple draw, or 5 card draw. In these games, players are dealt all their cards facedown and can choose to exchange cards with the deck. To stay “pat” means to choose not to exchange any cards, signaling that you already have the perfect hand. This phrase is often abbreviated to “I’ve got it down!”

They’ve got a trick up their sleeve. – They have a secret advantage ready to deploy.

In poker games of old, cheaters would try to switch one of their cards with a card they’d hidden in their sleeve. This is sometimes rephrased as “they’ve got a card up their sleeve” but since the card is intended to trick other players we often just call it a trick.

Historically, blue poker chips have been the most valuable high-denomination chip on the table. Their likeness is used to describe well-known companies with high market capitalization.

Be careful not to tip your hand. – Don’t let anyone know about your secret plans.

This has nothing to do with tipping after winning a hand, instead, the idiom refers to physically tipping the edge of your cards so that they become visible to the rest of the table. Similar to the expression “keep your cards close to your vest,” we borrow the value of hidden information from poker and apply it to other areas of life.

Watch out, he’s a real wild card! – He could do anything!

While you may be familiar with wild cards from Uno, they got their start in poker. Before a standardized set of rules, players would make up their own poker games. Often this included a couple of wild cards (one-eyed jacks, the king of hearts, deuces, etc.) which could be used as any card in the deck. Since wild cards were capable of being so many different cards, the term “wild card” describes someone who is unpredictable and capable of doing anything. 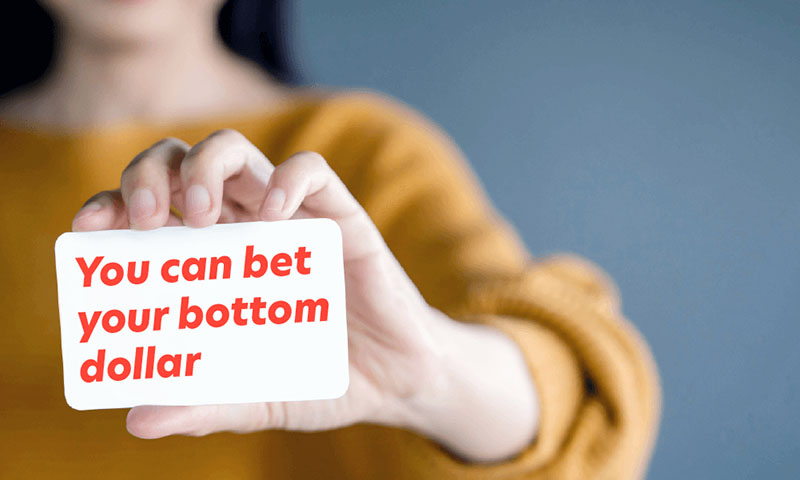 Poker In Our Language: Idioms and Vernacular

It turns out that the english language is riddled with references to poker! Here’s a fun list of poker colloquialisms that live in our speech, feel free to promote the game by throwing these into your conversations…