She boldly started a physical therapy business that was cash-only, without insurance long before it was a thing. She boldly built a business from a $0 revenue, one-woman shop, to a multi-million dollar, multi-state operation. She boldly sold her business which allowed her to focus her energy on helping other founders and entrepreneurs in a variety of industries as an advisor, connector, and angel investor.

April Oury, armed with a degree in physical therapy and a little hutzpah, found herself running in the investor class circle, full of MBAs and family money. “I found a lot of people played poker,” Oury said. “I come from a conservative religious background with parents who not only never played cards, but most of their circle considered card playing taboo.” Initially, Oury avoided the game, equating it with gambling. Until she was persuaded by PEAK6’s co-founder, Jenny Just, who had recently founded Poker Power. “She convinced me to give it a shot because it was more about strategy than it is anything else,” Oury said. “Poker teaches you how to think. It really piqued my interest to think about what the other person is going to do.”

She admitted to taking only the first half of the Poker Power classes – three times. She had not yet finished the classes when she was given an opportunity to vet a possible investment based in Las Vegas.

After spending two days looking over the company as a potential investment, Oury felt good about what she learned, and decided to take some time to explore her first poker room, at the  Bellagio. “I had no idea what I was doing, but I thought ‘well, if I’m going to do it, I might as well do it here,” she shared.

She took a video of herself in front of the Bellagio’s water feature, boldly declaring “I’m going in there and I’m going to win!”

Ironically, she hadn’t a clue where the poker room was, how to garner a spot at the table, or even how to buy chips. Once she found the room, she said she learned how it worked by watching as players walked up, put their names on a list, and bought chips from a window in the back of the room. In no time, Oury finally took her seat at the table, “I don’t remember seeing any women in there, except the women who were working.” She went on, “I was put at a table. Nobody said a word to me. The first couple of rounds, I just folded. I didn’t have anything to play but this gave me a good opportunity to watch and learn the basic logistics and start strategizing what might work at the table. Then I started putting in a couple of chips here and there. I kept losing.”

Finally, she peeked at her hand and saw she was dealt pocket aces. “My heart was racing so hard!” Oury admitted. “I was thinking, ‘Don’t let anyone see your face. You’re going to turn red and then they’ll know.’ So I was playing it cool. I put in more than I normally would, but no one seemed to notice.”

She kept adding to her bets. The pot grew as everyone at the table tossed in their chips. Once the final card was turned over, Oury decided to go all-in. The other players finally began to take notice. One by one they started to fold, until only one player was left to call her bet.

“That was when I won all my money back, times four,” she said. “That was the first time anyone said anything to me the entire time. One guy said, ‘Wow, nice job, nice hand.’ I played two more hands because I didn’t know how to leave the table! I finally asked the dealer if I could leave.”

She learned a lot about her own resiliency and ability to take risks. She drew strength from her Poker Power lessons and the live-table experience for the next round of vetting the Las Vegas potential investment. “It actually helped me for the rest of that trip and the investment.” Oury went on to say, “I pushed a little bit more during the vetting. It helped me make a much better choice on that trip.”

Oury had already played her cards right with a successful business exit while helping others with their entrepreneurial business dreams as a strategist, connector, and investor. So what could poker teach this woman about being courageous, bold, and perceptive?

From the outside looking in, no one would know that Oury had a nagging feeling she didn’t really belong among the investor circle. In fact, she would admit that investors have asked for her opinion and encouraged her to participate more, but it was she who held herself back, thinking she didn’t have the credentials – no MBA, no long history of investing business success.

Oury’s poker experience gave her an avenue to stretch her risk muscle, trying out her newfound confidence and skills in a low-risk scenario. Taking her seat at a poker table where no one knew her and only a few dollars were at stake – not her reputation, not her whole business, not her self-worth. She faced her fear of rejection head-on, and failure showed her how resilient she could be as she stepped into the unknown.

“I’m telling my story because I found out most women don’t take the chance at a live game because they think they have to be a professional poker player,” Oury said. “They feel too intimidated because it is a whole room of men who have been doing this for hours and hours. It is scary at first, but once you take your seat, you can feel the confidence grow.”

Create your own powerful story when you sign up for our community poker lessons today. 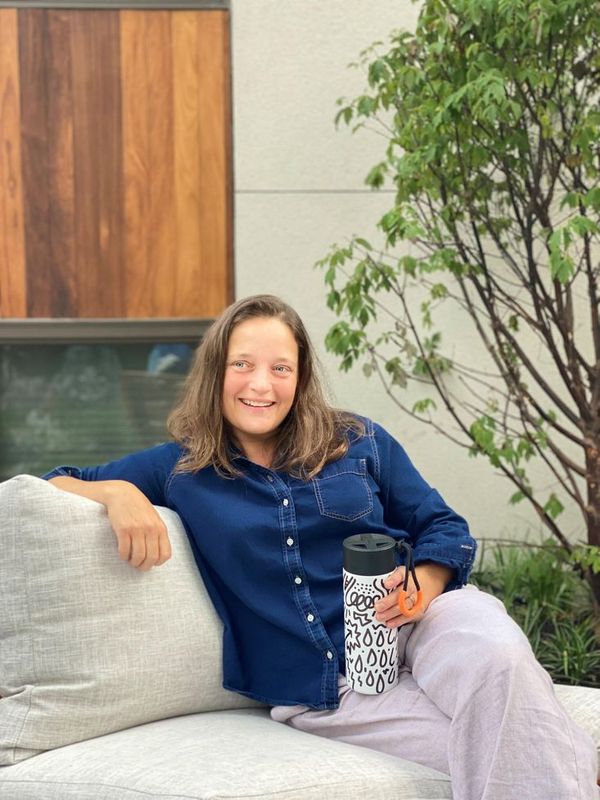 April took a chance at a Las Vegas poker table and won much more than a stack of chips.